Between July and August 2014, I and art curator Alessandra Ferlito have conducted a campaign of field recordings in the Salento Area, a popular summer destination in Puglia (Italy).

Numerous vocal calls of several African vendors (mainly from west African countries), walking for many hours a day along the seashore, were recorded. I was primarily interested in the way in which vocal calls were created and in the way they were perceived, by people hanging on the beach for their summer vacation.

Our campaign was titled ‘ethnography of a sound with no presence,’ drawing from the work of anthropologist Paul Silverstein, who defined the presence of African immigrants in Southern Europe as a “hidden presence,” referring to their lack of rights, the refusal to recognize them as citizens, and their consequent invisibility.

However, the situation I observed on the beach differed from Silverstein’s definition. The presence of black vendors was not only accepted, but also looked for, by tourists. At that point, I was thinking of the beach as a symbolic, liminal space, where their presence was allowed and, therefore, the vendors’ commercial activitity was part of a larger attempt to find a way to be heard in a deaf society. The definition of the sociologist and scholar of law Imani Perry seemed to me more appropriate: those vocal sounds on the beach were a reflection of the “acceptance of a narrow multicultural poetics,” based on appreciation of “decorative” and “entertaining differences.” 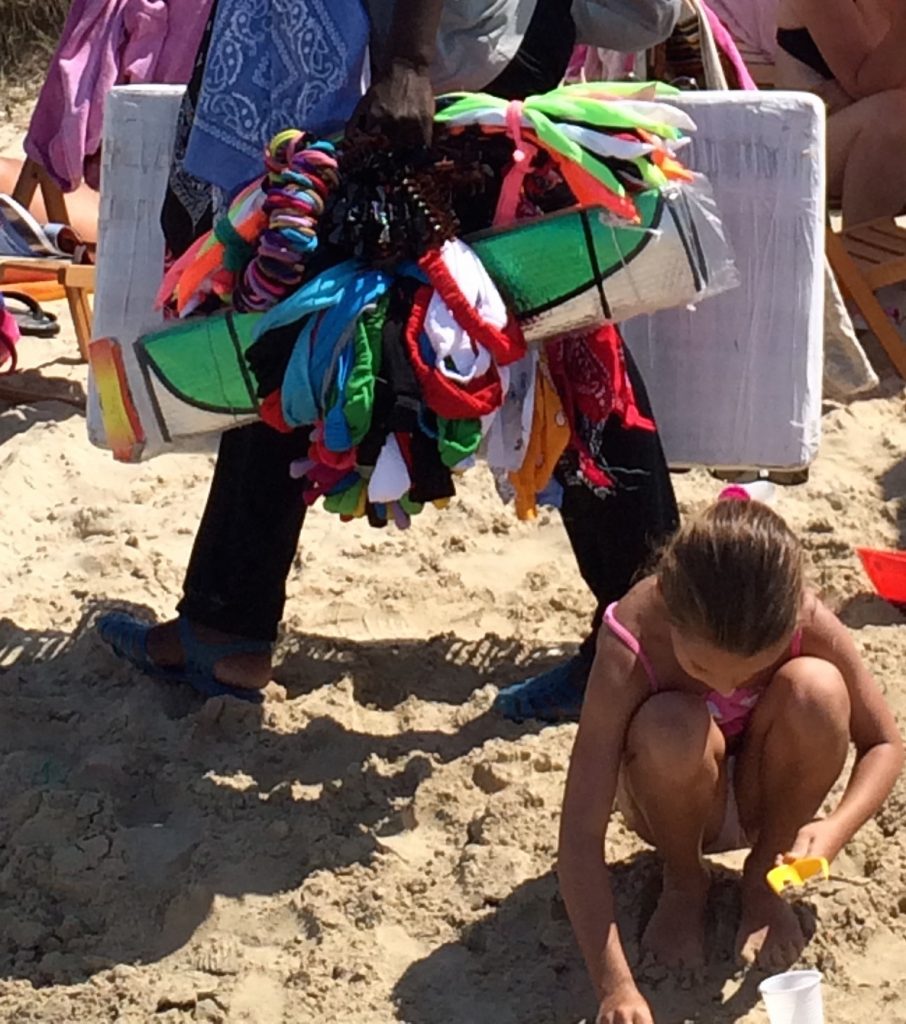 The documentation I collected became an archive of the soundscape of Salento beaches, where the selling of objects by black vendors is part of the tourist experience. The archive does not hide social issues and inequalities that African immigrants or second generations experience on a daily basis in Italy; it is rather a picture of them. Nevertheless, I was looking at the soundscape of this liminal space in a different manner, as a space of negotiation and of a positive confusion of social boundaries.

Right after the conclusion of our fieldwork, the Italian Department of Interior’s head, Angelino Alfano, while presenting the new security plan “Spiagge Sicure” (Safe Beaches), addressed the presence of black vendors with these words: “I believe that Italians are also rather exhausted for being bothered and molested by an exaggerated number of vu cumprà on Italian beaches.” Vu cumprà is a racist expression that identifies people of color who work as vendors. Aside the racism of his words, I see in Alfano’s statement the divide between reality and its representation in the public discourse. No one on the beaches where we did the fieldwork uses that expression anymore. As a matter of fact, Alfano’s plan did not accomplish any result, and – as far as I know – vendors and tourists kept sharing the liminal space of beaches till the end of August, which is the official ending of Salento summer holidays.

What I wanted to highlight here is that voices constitute a powerful tool to interact with other people in the daily life and in the present moment, despite the burdens of prejudices and biased representations by mass-media. Voices can fill the void between the most blatant stereotypes and create new meanings. The audio track that I have designed encompasses voices that use different Italian dialects, as well as French, English, and Wolof words. They play with high notes or raucous timbres. Voices stay on long notes, so that they are more identifiable in the seaside babel. These are voices that catch the attention of youth; voices that attract kids; voices that describe the wares or engender a laugh. Or they might simply whisper an unknown motif.

Each and everyone of the people recorded has a story to tell, an experience and a sensibility that find their way into calls, timbres, phonemes, and sounds. As explained by Joe (fake name) from Dakar, but based in Treviso (Northern Italy), at the end of the recording, they are voices of persons who consciously aim to induce a need, to raise sentiments, thoughts, emotions, and desires in the minds and hearts of the listeners. Voices that, simply put, accomplish their mission.